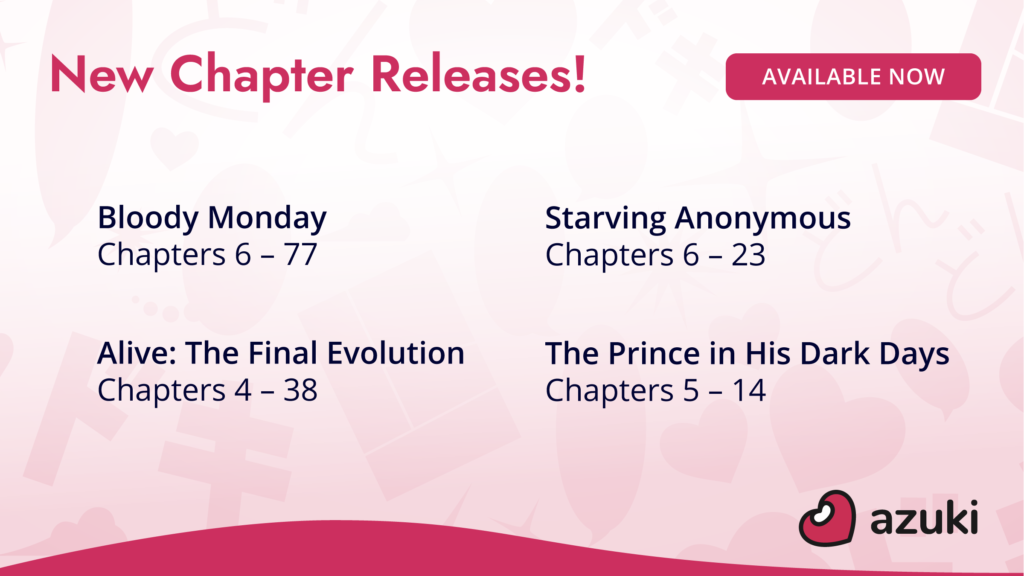 Hey manga fans, I hope you’re enjoying the new anime adaptation of EDENS ZERO (and keeping up with the manga here on Azuki of course 😘)

This week there’s more EDENS ZERO, a new chapter of To Your Eternity after a short hiatus last week, Cardcaptor Sakura, and more! And of course, additional chapters of four dark dramas and thrillers sure to keep you on the edge of your seat. Keep reading for all the deets!

Four Knights of the Apocalypse Chapter 29: A Boy’s Resolve

New Chapters of Dramas and Thrillers

Bloody Monday: Takagi Fujimaru may seem like a regular high school student, but behind the cheery facade lies a genius hacker by the name of Falcon. When his father is framed for a murder, Falcon uses his brilliant hacking skills to try and protect his sister and clear his father’s name. However, he finds that his father, an agent in an elite government agency, was involved with something far more complex than a simple murder. A terrorist group is plotting against the city of Tokyo and it is up to Falcon, with the help of his friends to unravel the twisted plans set in place to kill millions of people.

Starving Anonymous: It’s a day like any other, and high school students I’e and Kazu are on the bus home from school when, suddenly, it floods with a mysterious gas. The pair pass out and wake up to find themselves aboard a truck packed full of human bodies. They’re surrounded by rows of frozen corpses…and a staff of living human beings sawing them into pieces. Where are they…and how can they escape from this nightmare? In this brand-new hit from the creators of Fort of Apocalypse, mankind finds itself locked in a desperate fight for survival!

Alive: The Final Evolution: A strange virus is making its way around the globe, causing its victims to commit suicide–and becoming a lethal pandemic in less than a week. Now a group of Tokyo teens who have survived the outbreak are wondering why they are still alive.

The Prince in His Dark Days: A drunkard for a father, a household of poverty … For 17-year-old Atsuko, misfortune is all she knows and believes in. Until one day, a chance encounter with Itaru—the wealthy heir of a huge corporation—changes everything. The two look identical, uncannily so. When Itaru curiously goes missing, Atsuko is roped into being his stand-in. There, in his shoes, Atsuko must parade like a prince in a palace…