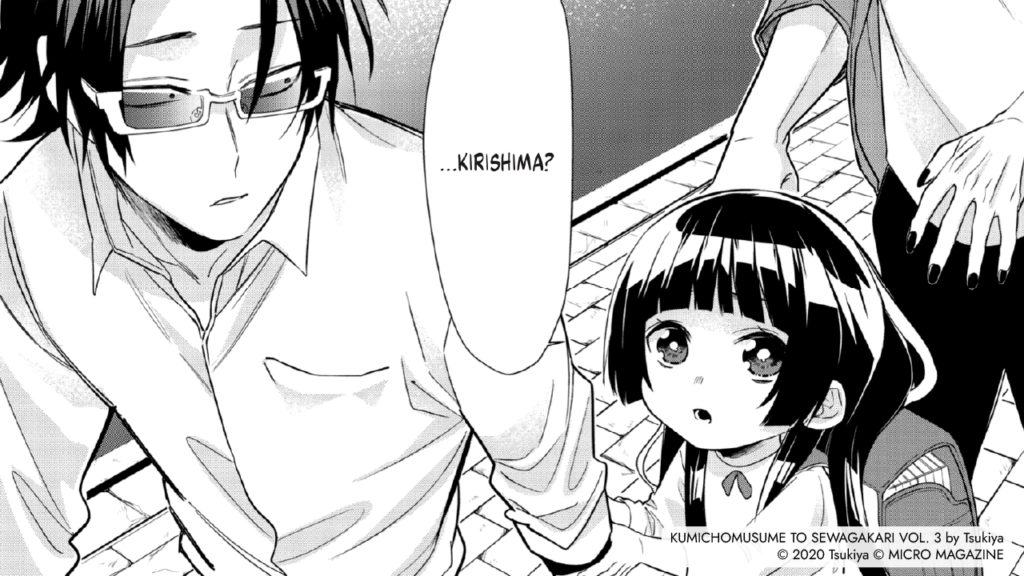 The Yakuza’s Guide to Babysitting by Tsukiya is the charming manga series that has won fans’ hearts with its fresh premise of a violent, heartless yakuza taking care of a sweet and innocent little girl. Kirishima Tooru, known as “The Demon of the Sakuragi Crime Family,” is tasked with babysitting his boss’s young daughter Yaeka, and heartwarming comedy ensues. In the latest volume, currently available exclusively on Azuki, Kirishima goes missing, and Yaeka and fellow yakuza Sugihara must find him before he succumbs to the guilt and darkness within him. With an anime by studios Feel. and Gaina set to premiere on July 7th, Azuki partnered with Kaiten Books, the series’ English publisher, to interview Tsukiya and get an inside look at the creation of this delightful series. Enjoy!

What inspired you to create this story? Was there a manga, anime, or movie about yakuza that did it?

Tsukiya: I started The Yakuza’s Guide to Babysitting with a simple idea: just draw what I like, and that’s it. There wasn’t really anything special that inspired it.

Did you have to do a lot of research about the yakuza to come up with the characters and their relationships?

Tsukiya: My goal was never to create a series that accurately depicted every aspect about the yakuza, but I did make sure to do my own research into the subject before I started drawing. You can think of it as a look at the world of the yakuza through my own filter.

What are some of your personal favorite manga?

Tsukiya: BLEACH, A-BOUT!, and The Vampire Dies in No Time.

Have you been consulted a lot for the anime adaptation? How are you feeling about it?

Tsukiya: I feel like the staff at the anime studio really got what made the world of The Yakuza’s Guide to Babysitting tick. The show looks amazing so far!

Ever since I was little, it’s always been a dream of mine as a creator for something like this to happen. Now my dream has come true in the best way possible, and I couldn’t be happier.

There are a lot of fun and interesting characters in the series. Are any of them based off people you know in real life?

Tsukiya: Everyone in the series is based off my own personal preferences, so there aren’t any real-life models for them.

Who is your favorite and least favorite character to draw and why?

Tsukiya: I love drawing all of them, but if I had to pick my favorites they would be Kirishima (the resident Demon of the Sakuragi Family), the rough-and-tumble Masaya, and Mashiro, a character so aloof even I don’t know what they’re thinking sometimes. They’re all amazing so there’s no one I hate to draw.

“Family” is a strong theme in the series. Is there a message about family that you want to get across to your readers?

Tsukiya: It’s true the word “family” gets thrown around a lot in the series, but I don’t think that being related by blood is the only requirement for someone to be classified as part of one.

Just like how love doesn’t always have to be between a man and a woman, I don’t think there’s any definition of family that you have to force yourself to adhere to. If there’s someone or someplace in your life that makes you feel like you belong, then I think that’s enough to call them family. I’d be glad to know if you pick up even a hint of that message when reading the series.

Is there anything you’d like to say to your overseas fans?

Tsukiya: First of all, out of all the manga out there today, thank you so much for finding and reading The Yakuza’s Guide to Babysitting! Never in my wildest dreams did I think that something I started drawing because I wanted to show off what I liked would reach a global audience, and I couldn’t be happier. I hope you all continue to enjoy what’s in store for The Yakuza’s Guide to Babysitting!

For more of The Yakuza’s Guide to Babysitting, stop by Azuki (booth #517) and Kaiten Books (booth #2817) next weekend at Anime Expo. And make sure to pick up Volume 4 in ebook form when it releases this Friday, June 24 from Kaiten Books! A print edition is coming soon too!