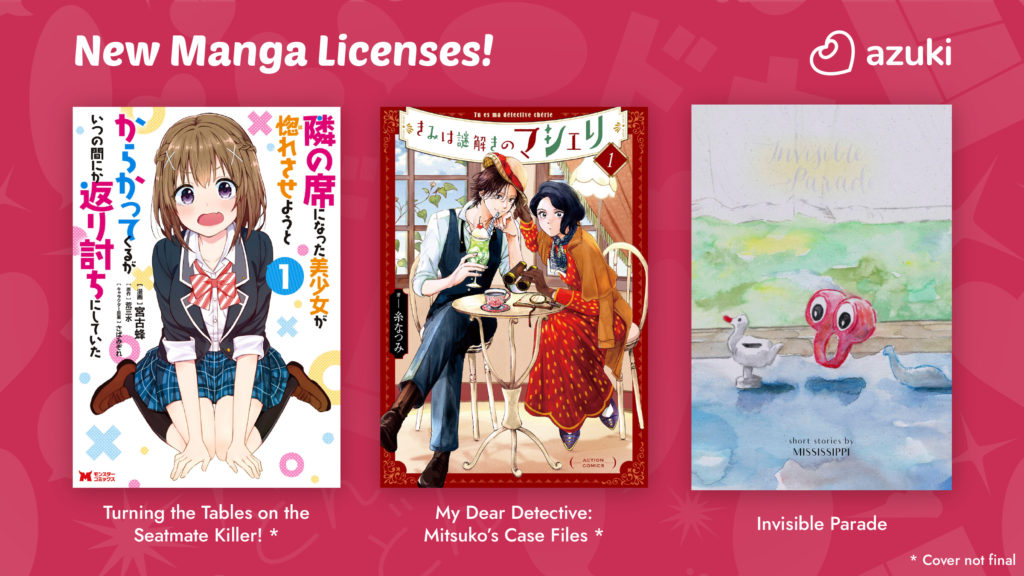 We just announced three new series coming to Azuki at our industry panel at Anime Expo 2022 in Los Angeles! Keep reading for all the details.

💔 Turning the Tables on the Seatmate Killer!

First up, coming soon exclusively to Azuki is Aresanzui’s witty light-novel-turned-manga Turning the Tables on the Seatmate Killer!

Yuuki Narito’s new seatmate Yui Takatsuki is the notorious “Seatmate Killer,” who strings guys along before breaking their hearts. But Yuuki’s so clueless he might be immune to her charms! And so begins a battle of wits (or lack thereof) in this hilarious rom-com.

Our second series from Futabasha (the Japanese publisher behind Hikaru in the Light!), we’ll be translating and releasing new chapters weekly until caught up; then we’ll simulpub thereafter. While we’re hard at work getting the series ready for release, add it to your list to get notified once it’s live!

Next, we have one more exclusive from Futabasha: My Dear Detective: Mitsuko’s Case Files by Natsumi Ito.

Mitsuko is Japan’s first female detective in the turbulent 1920s! When a handsome college student shows up with a new case, he ends up assigned as her new assistant! Join Mitsuko and Yoshida as they solve cases, explore the changing cultural landscape of early Showa-era Japan, and maybe grow a little closer along the way in this fashionable mystery series.

You won’t want to miss this charming mystery chronicle! Add it to your list to get notified once we start our weekly new chapter releases.

Last but not least, turn your eye to an anthology from our friends at Glacier Bay Books: Invisible Parade. Consider this painter and comic artist MISSISSIPPI’s definitive collection, spanning over a decade of works.

Available to read RIGHT NOW 🔔 with more chapters on the way. So dive right in!

We’re always on the lookout for new licenses; but with so much great manga out there, it’s a challenge (albeit a very fun one) deciding where to start! If you have recommendations for series to release in English, we’d love to hear them 🥰